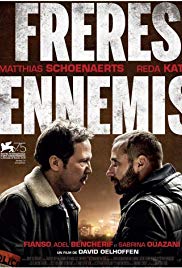 Close Enemies is a 2018 Belgian-French crime drama film directed by David Oelhoffen. It was selected to be screened in the main competition section of the 75th Venice International Film Festival.

Imrane and Manuel, members of an Arabic crime family, celebrate their friend Nouri's release from jail. Nouri's contacts in jail lead them to a drug deal. Urged on by Imrane, Manuel sets up the deal. En route, they are ambushed in a drive-by that results in the deaths of Imrane and Nouri. Manuel escapes but becomes the primary suspect of both the criminal underworld and the police. Driss, an Arabic narcotics officer who grew up with Manuel and the others, reveals to Manuel that Imrane was working as an informant. Manuel initially refuses to believe this and rejects his offer to work together. Already distrusted by his fellow police officers, Driss experiences further difficulty in the Arabic community when he attempts to make contact with family and former friends during his investigation.