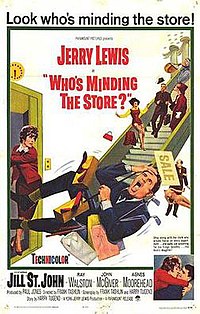 Rich Mrs. Phoebe Tuttle (Agnes Moorehead) is upset that her daughter Barbara (Jill St. John) is engaged to a man beneath their social stature, Norman Phiffier (Jerry Lewis). Barbara has been keeping her heiress status to the Tuttle Department Store fortune a secret from Phiffier, knowing he is a proud person who refuses to marry her until he can afford to buy her a home.