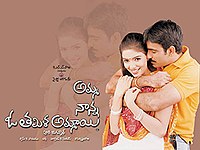 Chandu (Ravi Teja)'s entire life is about his mother, Lakshmi (Jayasudha), a college lecturer. They together live in Hyderabad. When Chandu was a little boy, Lakshmi separated from her husband, Raghuveer (Prakash Raj), who is his father. Chandu is a great kick-boxer, and is very passionate. Chandu later meets Mugambigambal (Asin) aka Chennai, a Tamil girl from Chennai, and starts to fall in love with her. Chandu's happy life is suddenly jolted when his mother dies of a heart attack. On her deathbed, she tells him to go to Visakhapatnam to meet Raghuveer, who is a kick-boxing champion that won the championship six times in a row. Chandu goes to Visakhapatnam to meet him.