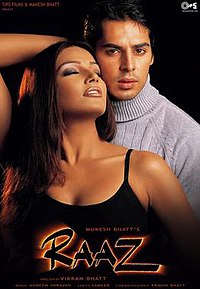 Raaz is a 2002 Indian horror film directed by Vikram Bhatt and produced by Mukesh Bhatt, Kumar S. Taurani, Ramesh S. Taurani. The film stars Bipasha Basu and Dino Morea as a couple who have moved to Ooty to save their failing marriage. However, what they find in their new home is more than they expected when a ghost starts haunting the place. The wife, Sanjana suddenly finds that her husband is part of the ghostly conspiracy, which she must fix to escape. The film is an unofficial adaptation of What Lies Beneath. The film was dubbed in Tamil and Telugu as Rahasyam.

The film starts with a group of college students enjoying a picnic in a beautiful forest in Ooty. One of the girls, Nisha (Mink Brar) in that group, dies after being attacked under mysterious circumstances outside a bungalow in front of the forest. She had attacked her boyfriend too, who, though injured, managed to live on. She was rushed to the hospital, where just before dying, her facial look and voice changed completely for a short while, thus confusing all the attending doctors. Professor Agni Swaroop (Ashutosh Rana), who is supposedly an expert in phenomena involving the unexplained and the supernatural is called by the police to look into the matter. Prof. Swaroop and the police visit the forest at the same place where Nisha was attacked and after investigating from Nisha's boyfriend, Prof. Swaroop declares that she was attacked by a spirit. He further reveals that this spirit has awakened for some purpose and it will not stop until that purpose is fulfilled.