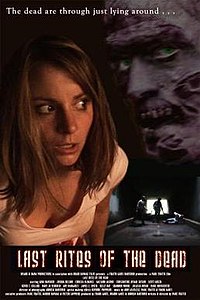 Zombies Anonymous (originally Last Rites of the Dead) is a horror/comedy zombie film released in 2006, starring Gina Ramsden and Joshua Nelson. It was written and directed by Marc Fratto and produced by New York production company Insane-o-rama productions.

An unexplained zombie plague breaks out, causing the recently deceased to continue walking the earth. Despite being undead, the zombies retain all of their senses and wits, including the ability to speak and think rationally. The only way to kill a zombie is to completely destroy the brain, preferably with shotgun or explosives. An international crisis develops and the world breaks up into several camps, including anti-zombie militants, and zombie sympathizers.