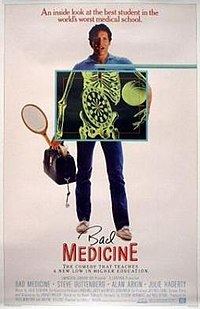 Bad Medicine is a 1985 American comedy film starring Steve Guttenberg, Alan Arkin and Julie Hagerty. The film was written and directed by Harvey Miller, and was based on the novel Calling Dr. Horowitz, by Steven Horowitz, MD and Neil Offen.

Below-average pre-medical student Jeffrey Marx (Guttenberg), after being rejected by prestigious medical schools, is sent by his father (Bill Macy) to a seemingly sub-standard medical school in Central America. Jeffrey eventually discovers the plight of local villagers in need of medical assistance. With the help of fellow students (including romantic interest Hagerty), he illegally provides medical services to the villagers. Eventually, the school's authoritarian dean (Arkin) discovers the students' activities and decides to prosecute. However, the dean dismisses the charges at the urging of the villagers.