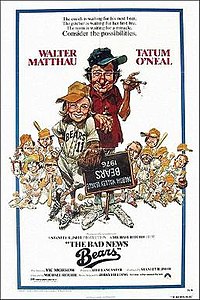 The Bad News Bears is a 1976 American sports comedy film directed by Michael Ritchie and written by Bill Lancaster. It stars Walter Matthau as an alcoholic ex-baseball pitcher who becomes a coach for a youth baseball team known as the Bears. Alongside Matthau, the film's cast includes Tatum O'Neal, Vic Morrow,

In 1976, Morris Buttermaker, an alcoholic pool cleaner and former minor-league baseball pitcher, is recruited to coach "the Bears," a youth baseball league expansion team of misfit players in Southern California, formed as a settlement to a lawsuit brought against the league for excluding such players from other teams. Shunned by the more competitive teams (and competitive parents and coaches), the Bears are the outsiders, and the least talented team in the league. Buttermaker forfeits the opening game after the team allows 26 runs without recording an out.