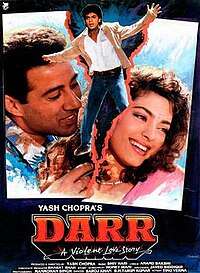 The film begins with Kiran (Juhi Chawla), a beautiful college student, returning home to her brother Vijay (Anupam Kher) and his wife Poonam (Tanvi Azmi) for Holi celebrations. She is being obsessively stalked along the way by Rahul (Shahrukh Khan), her classmate who has a crush on her. Kiran's boyfriend Sunil (Sunny Deol) is a Navy-Marine Commando officer and is on a mission to free a child hostage from some terrorists on the high seas. Sunil saves the child hostage. Sunil's Captain Mehra (Dalip Tahil) is also the father of Rahul. Rahul tries to be friendly with Sunil in order to be closer to Kiran.