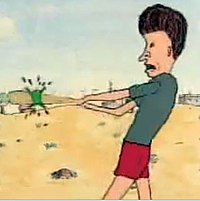 Frog Baseball is a short film created by Mike Judge in 1992, which marks the first appearance of the Beavis and Butt-Head characters. It premiered in The Sick and Twisted Festival of Animation.

The short starts out with a title card that says "Inbred Jed's Homemade Cartoons", with the character of Inbred Jed staring at the camera and cackling. The two teenagers by the name of Beavis and Butt-Head shown switching channels on their TV, watching TV commercials and laughing at a Suzanne Somers Thighmaster commercial. While blowing up insects with firecrackers in a field, Beavis and Butt-Head spot a frog and exclaim "frog baseball!"; they then proceed to play baseball with the frog. When they hurt the frog, they see a poodle and charge after the dog with a baseball bat, exclaiming "dog baseball!". The credits roll as the viewer hears the duo hit the poodle with a bat and the poodle yelping in pain (not seen).