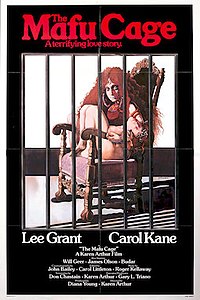 The Mafu Cage (also released as My Sister, My Love, Deviation and Don't Ring the Doorbell) is a 1978 American psychological thriller film directed by Karen Arthur, and starring Carol Kane and Lee Grant. Arthur worked with screenwriter Don Chastain to loosely adapt Eric Westphal's play Toi et Tes Nuages, which she had seen in Paris in 1975. The finished product premiered at Cannes in 1978.

Grant and Kane play a pair of incestuous sisters who live together in a house that is falling apart in the Hollywood Hills. Their house was formerly owned by their late anthropologist father. Ellen (Grant), an astronomer, tries her best to take care of Sissy (Kane), a mentally ill eccentric who enjoys keeping her pet "mafus" (apes) in a cage in their living room. None of the mafus last long, given Sissy's violent outbursts.