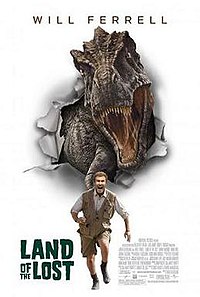 Land of the Lost is a 2009 American adventure comedy film directed by Brad Silberling, written by Chris Henchy and Dennis McNicholas and starring Will Ferrell, Danny McBride and Anna Friel, loosely based on the 1974 Sid and Marty Krofft television series of the same name. The film was theatrically released on June 5, 2009 by Universal Pictures.

Pompous paleontologist Rick Marshall has a low-level job at the La Brea Tar Pits, three years after a disastrous interview with Matt Lauer of Today became a viral video and ruined his career. Doctoral candidate Holly Cantrell tells him that his controversial theories combining time warps and paleontology inspired her. She shows him a fossil with an imprint of a cigarette lighter that he recognizes as his own along with a crystal made into a necklace that gives off strong tachyon energy. She convinces him to finish his tachyon amplifier and come help her on a seemingly routine expedition to the cave where Holly found the fossil, which is in the middle of nowhere. With cave gift shop owner Will Stanton they raft into the cave, where Marshall has detected high levels of tachyons. He activates the tachyon amplifier, triggering an earthquake that opens a time warp into which the raft falls. The group finds themselves in a desert, filled with various items from many eras, and without the amplifier. They rescue a primate-like creature, Cha-Ka of the Pakuni tribe, who becomes their friend and guide.