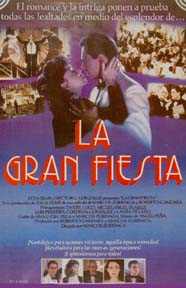 La Gran Fiesta (in English, The Great Party) is a 1985 Puerto Rican drama film, written and directed by Marcos Zurinaga, based on a story by Ana Lydia Vega. The film was selected as the Puerto Rican entry for the Best Foreign Language Film at the 59th Academy Awards, but was not accepted as a nominee.