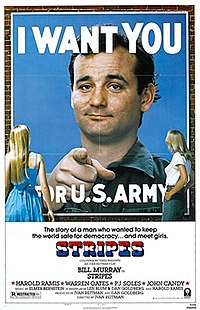 Within a few hours, Louisville, Kentucky cab driver John Winger loses his job, his apartment, his car, and his girlfriend Anita, who has grown tired of his immaturity. Realizing his limited prospects, he joins the Army. He talks his best friend Russell Ziskey, a vocational ESL teacher, into joining him, and they go to a recruiting office and are soon sent off to basic training at nearby Fort Arnold.