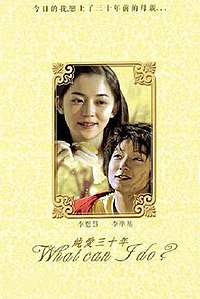 Drama City: "What Should I Do?"(드라마 시티: 어떡하지?") is Episode 234 of the South Korean KBS television series, Drama City, which is a collection of single episode short dramas. Each episode has a different story, and the cast changes every week. Seong Ho, played by Lee Joon-gi, lives a poor life with his father, while his sickly mother is hospitalized. But suddenly, he is later on transported back into his father's past and discovers more about his parents and how they met.