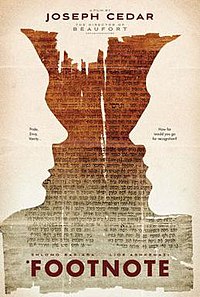 Footnote (, translit.He'arat Shulayim) is a 2011 Israeli drama film written and directed by Joseph Cedar, starring Shlomo Bar Aba and Lior Ashkenazi. The plot revolves around the troubled relationship between a father and son who teach at the Talmud department of the Hebrew University of Jerusalem.

Eliezer Shkolnik (Shlomo Bar Aba) is a philologist who researches the different versions and phrasings of the Jerusalem Talmud. He and his son Uriel (Lior Ashkenazi) are both professors at the Talmudic Research department of the Hebrew University of Jerusalem.