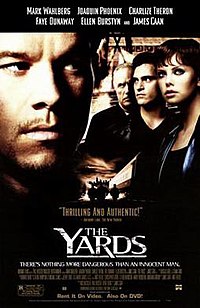 Leo Handler rides the subway to his mother Val's house in Queens, New York, where she throws a surprise party celebrating his parole. His cousin Erica Soltz is at the party with her boyfriend Willie, who takes Leo aside and thanks him for serving time in prison, implying that Leo had taken a fall for their gang of friends. Leo is eager to find a job to support his mother, as she has a heart condition. Willie suggests working for Erica's stepfather, Frank Olchin.