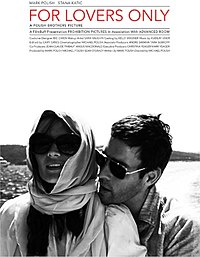 For Lovers Only is a 2011 romance film produced by the Polish brothers and Sean O'Grady. The brothers also had different roles in the film, with Michael as director and Mark as writer and also actor himself. The film also stars Stana Katic. It was expected to be released in theaters in the United States in June 2011, but eventually adopted an online distribution strategy.

In the film, Katic plays Sofia, a journalist and former model, while Polish plays Yves, a former fashion photographer. Sofia chances upon Yves, a former lover, while on assignment. The story draws upon Claude Lelouch's A Man and a Woman and the French New Wave for inspiration and focuses on the couple's flight from Paris via a variety of forms of transportation: train, car and motorcycle. Their travels extend from Normandy to St. Tropez. Mark Polish notes that the film lies somewhere between A Man and a Woman and The Beatles' A Hard Day's Night. The film, which was shot in Paris and various locations throughout France, premiered for industry guests in Beverly Hills on September 29, 2010.