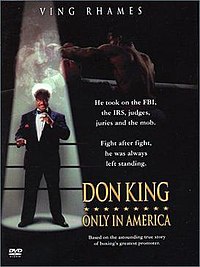 Don King: Only in America is a 1997 television film directed by John Herzfeld and written by Kario Salem (based on the book Only in America: The Life and Crimes of Don King by Jack Newfield). The film stars actor Ving Rhames as Don King and tells the story of King becoming a famous fight promoter and boxing manager.