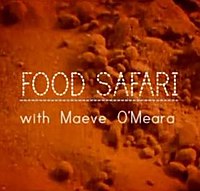 Food Safari is an Australian television food series presented by Maeve O'Meara and produced by Kismet Productions in association with SBS TV Australia, and explores the cuisines brought to Australia by its immigrants. From seasons 1 to 4, each episode covered a cuisine from a particular culture, including commonly used ingredients and where to obtain them in Australia, the preparation and consumption of 'popular favourites', basic dishes and desserts/sweets. Seasons five to seven, whilst still covering Australian cuisine, focused on the basic elements involved in food preparation, with Food Safari Fire consisting of barbecuing, grilling and smoking of meat and vegetables, Food Safari Earth consisting of vegetarian dishes and focusing on European fermentation and preservation of vegetables, and Food Safari Water which focused on seafood.