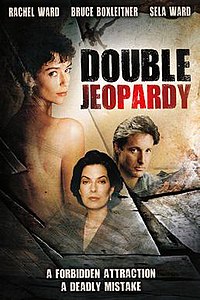 Double Jeopardy is a 1992 television thriller film directed by Lawrence Schiller and starred by Rachel Ward and Bruce Boxleitner.

Jack Hart lives with his lawyer wife and young daughter and enjoys a wonderful life. Jack's old girlfriend, Lisa, comes into town and they have an affair. Lisa kills her current boyfriend in self-defense and Jack witnesses the whole thing. Lisa goes on trial for murder with Jack's wife as her lawyer. As the movie progresses, Lisa's devious side becomes known. Jack is fired from his job because of the scandal. Lisa has a dark side which is discovered but she can not be re-tried for murder when she was really guilty. Jack re-plays the staged crime in his head and figures out that he was set up and the rape was staged. Lisa sets out to climb the devils needle. Jack and Lisa climb the rock by hand, but Lisa falls and hits her head and dangles in mid air. Police show up and you see a yellow tarp covering the dead body of Lisa. Jack's wife finds a map in the trash and drives out to see him. The movies ends with them looking at each other from a distance.