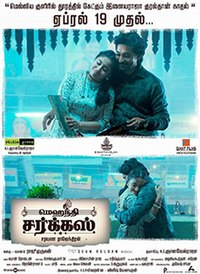 Mehandi Circus is a 2019 Indian Tamil-language action romantic drama film written by Raju Murugan and directed by Saravana Rajendran who is also his elder brother on his directorial debut. The film casts newcomer Madhampatty Rangaraj in main lead role and Shweta Tripathi on her Tamil film debut in female lead role while RJ Vigneshkanth and Vela Ramamoorthy play supportive roles. The film's soundtrack is composed by Sean Roldan while Selvakumar S. K. and Philomin Raj of Maanagaram fame are selected as cinematographer and film editor respectively. The film is produced K. E. Gnanavel Raja under his production studio banner Studio Green. This film had positive reviews from critics and general audience.

The story starts with a girl making plans to fulfill her sick dying mother Mehandi's (Shweta Tripathi) dying wish. Mehandi keeps asking to see someone one last time. Her family trashes her alcoholic father who abandoned both of them. The girl resolves to bring him back in time for her mother to see him and sets out. Meanwhile, in a bar in Kodaikanal, a drunk Jeeva (Madhampatty Rangaraj) is winning a game of “guess the singer”. He is unstoppable except for a song that was released post-1992. Someone makes a remark that the world stopped for him in 1992. When they play the Ilaiyaraaja song “Oh Paapa Laali” (from Idhayathai Thirudathe), he walks away in anger. The next day, Mehandi’s daughter finds Jeeva, who is showing off his knife throwing skills to his friends. She tells him her mother’s dying and asks him to meet her mother one last time. Jeeva agrees and they set out to the village in Maharashtra where Mehandi is. Jeeva tells the daughter about the day he first saw Mehandi.