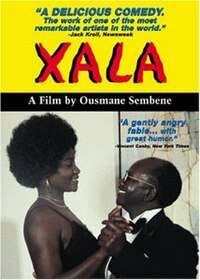 Xala (, Wolof for "temporary sexual impotence") is a 1975 Senegalese film directed by Ousmane Sembène. It is an adaptation of Sembène's 1973 novel of the same name. The film depicts El Hadji, a businessman in Senegal, who is cursed with crippling erectile dysfunction upon the day of his marriage to his third wife. The film satirizes the corruption in African post-independence governments; El Hadji's impotence symbolizes the failure of such governments to be useful at all.

El Hadji Abdoukader Beye, a Senegalese businessman and a Muslim, takes on a third wife, thereby demonstrating his social and economic success. On the wedding night he discovers that he is incapable of consummating the marriage; he has become impotent. At the beginning, he suspects that one or both of his first two wives have put the spell on him, without realizing that he walks by the true guilty party every day (beggars and people he has stolen from). The film criticizes the African leaders' attitude after Independence, underlining their greed and their inability to step away from foreign influences.