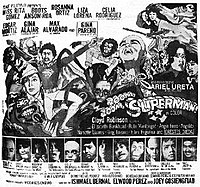 Zoom, Zoom, Superman! is a 1973 Filipino parody film of DC Comics superhero Superman. The film stars Ariel Ureta as the titular superhero, and is also his debut film. Filipino director Joey Gosiengfiao, who is known for his campy films, directed this film as one of his firsts. Elwood Perez and Ishmael Bernal were also co-directors. The film got three directors because it is a trilogy in one film and each director directed each episode.