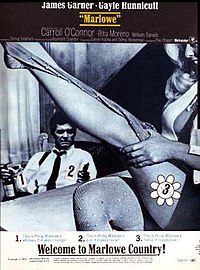 Los Angeles private eye Philip Marlowe is hired by a Kansas woman named Orfamay Quest, who desperately wants him to find her brother, Orrin. Marlowe follows Orrin's trail to a hotel, where he meets the desk clerk, Haven Clausen, and a guest named Grant W. Hicks, who both deny any knowledge of Orrin's whereabouts. After Marlowe has checked out Orrin's former hotel room, he finds Clausen murdered with an ice pick and a page torn out of the register book. Soon afterwards, Marlowe receives a call from Hicks, who nervously implores him to hold onto something for a day. When Marlowe arrives at his location, he finds Hicks with an ice pick buried in his neck and is confronted by a masked woman, who knocks Marlowe out and flees. Marlowe searches the room and finds a claim ticket for a photographic film, which he does not tell the police about. The police reveal that Hicks is a former mob runner. Later, when Marlowe views the pictures, he is confirmed in his belief that there is more to the case than a missing person.