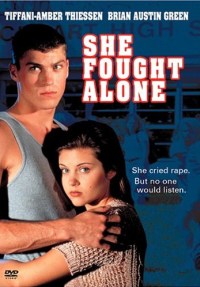 She Fought Alone is a 1995 American television film directed by Christopher Leitch. The film, which is based on a true story, stars Tiffani-Amber Thiessen and Brian Austin Green, who were known for Beverly Hills, 90210 and Saved by the Bell, respectively, by the time of release. It was released on Region 2 DVD in 2000 and Region 1 in 2004.

Caitlin Rose is a shy 17-year-old in the new town of Lockhart, Illinois. She is not very well known at her school, but with the help of her best friend, she is accepted into the popular group at school, known as The Crew. While partying one night, she bonds with Ethan, and eventually she's sleeping with him while being secretly watched by his best friend, Jace (whose full name is Jason). Acting under peer pressure, she soon starts to rebel, neglecting school and getting into trouble. A lot of the teachers are bothered by their behavior, complaining to administrators that they get away with everything, but to no avail.