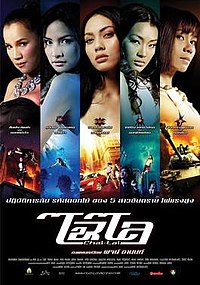 Chai Lai (, English title: Dangerous Flowers and also known as Chai Lai's Angels) is a 2006 Thai action film about five female top-secret crimefighters, each with the codename of a flower, Lotus, Hibiscus, Rose, Spadix and Crown of Thorns. The premise is modelled after Charlie's Angels.

The film begins on a passenger plane, where a young girl named Miki and her step-mother are taken hostage by a man and a cross-dressing woman. They call the father of Miki, but he has his own problems; another man is menacing him and when he tries to take the gun a fight breaks out and the father is shot. One of the Chai Lai members, Rose, enters the house and gets into a fight with another henchman.