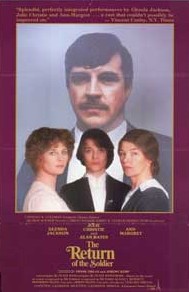 The Return of the Soldier 1982

The Return of the Soldier is a 1982 British film starring Alan Bates as Baldry and co-starring Julie Christie, Ian Holm, Glenda Jackson, and Ann-Margret about a shell-shocked officer's return from the First World War.

In 1914, a group of British soldiers is preparing to leave England to fight in The Great War in France, led by Captain Chris Baldry. He appears at one final farewell party thrown by his wife, Kitty, appearing withdrawn and distant throughout.