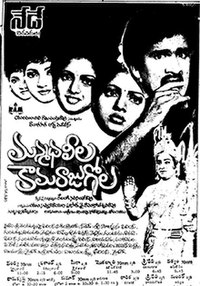 Manmadha Leela Kamaraju Gola is a 1987 Telugu-language fantasy comedy film, produced by M. Satyanarayana Prasad and Y. Rama Koteswara Rao under the Ram Gopal Art Movies banner and directed by Relangi Narasimha Rao. It stars Rajendra Prasad, Chandra Mohan, Kalpana in the lead roles and music composed by Vasu Rao. The film was recorded as a Hit at the box office.

Kamaraju (Rajendra Prasad), a playboy, is a disciple of Lord Manmadha (Chandra Mohan) (Cupid), the God of romance whom he can see. Kamaraju discusses with Manmadha regarding his romantic experiences with the girls. Once a man called Pandala Paramasivam (Suthi Veerabhadra Rao) who always goes for betting observes Kamaraju flirting behavior with girls and insults him before everyone. Here Kamaraju keeps a bit Paramasivam that he will make his daughter Kalpana (Kalpana) fall in his love and marry her. Kamaraju seeks a lot but fails, when Manmadha facilitates him in changing Kalpana's mindset and they get married. After the marriage, a dispute arises between Manmadha & Kamaraju, in the issue achieving Kalpana's love is their own credit. There onwards, it is a comic tale, Manmadha starts teasing Kamaraju, creates disturbances & disputes in his family life and separates the wife & husband. The rest of the story is how Kamaraju gets rid of these problems.