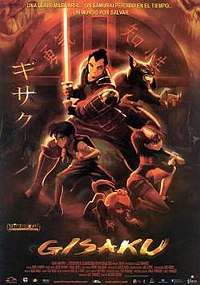 Gisaku is a Spanish animated feature film directed by Baltasar Pedrosa Clavero. It was first released in Japan on March 4, 2005, and in Spain on March 17, 2005. The film has three official soundtracks: Japanese, Spanish, and English.

The film relates the adventures of a young Japanese samurai named Yohei who visited Spain in the 17th century, in a story loosely taking its inspiration from the travels of historic samurai Hasekura. Yohei survived in hiding to the present day due to magical powers ("After centuries of lethargy, he awakes in a World he does not know"), and accomplishes many adventures in modern Spain as a superhero.