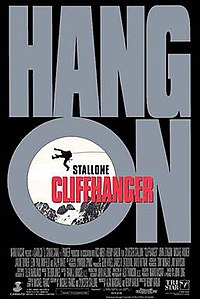 Cliffhanger is a 1993 American action-adventure film directed by Renny Harlin and starring Sylvester Stallone, John Lithgow, Michael Rooker and Janine Turner. Based on a concept by climber John Long, the film follows Gabe (played by Stallone, who co-wrote the screenplay), a mountain climber who becomes embroiled in a heist of a U.S. Treasury plane flying through the Rocky Mountains. Released on 28 May 1993, the film earned $255 million worldwide.

Rangers Gabriel "Gabe" Walker and Jessie Deighan are dispatched to rescue their friend Hal Tucker and his girlfriend, Sarah, after Hal suffered a knee injury and stranded them on a peak in the Colorado Rockies. As they try to rescue Sarah, part of her harness breaks. Although Gabe is initially able to grab her, her gloved hand slips out and she falls to her death. Hal blames Gabe for Sarah's death and Gabe is overcome with guilt, taking an extended leave.