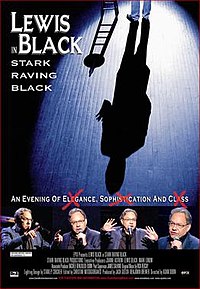 Stark Raving Black is a stand-up comedy film starring Lewis Black and directed by Adam Dubin. The 80 minute show was filmed in HD and 5.1 Surround Sound in Detroit, Michigan at The Fillmore Detroit on August 2, 2009. In the film, Black discusses politics and current events from the state of the economy to alternative energy. The DVD has 70 minutes of unedited and uncensored content, which is 40 minutes more than the television special.