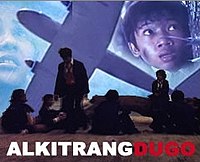 Alkitrang Dugo is a 1976 Filipino television film based on the novel Lord of the Flies by English novelist Sir William Golding.

A group of young Filipino athletes find themselves stranded on an uninhabited island after their plane crashes, claiming the lives of both their pilot and coach. Luis organizes the group and appoints himself leader. They find fresh water and gather coconuts. They then tried to build a shelter and tried to start a fire to keep warm and alert passing ships of their whereabouts, but Andy wants to stay on this island forever, because he is more interested in playing Indians and hunting wild game, and it soon becomes evident that he is unhappy with Luis's leadership. Andy challenges Luis to a proper vote, resulting in a division amongst the group, half in favor of Andy and half in favor of Luis. What follows is a rapid decline into all out war between the two groups.