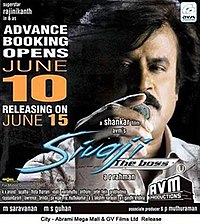 Sivaji: The Boss is a 2007 Indian Tamil-language vigilante-action film directed by S. Shankar and produced by AVM Productions. The film stars Rajinikanth and Shriya Saran, with Suman, Vivek, Manivannan and Raghuvaran playing significant roles in the film. A. R. Rahman composed the soundtrack and background music, while Thota Tharani and K. V. Anand were the film's art director and cinematographer respectively.

Sivaji, an Indian software architect, returns to India from the United States. He aims to establish a non-profit trust called Sivaji Foundation, which includes a network of hospitals and educational institutions that serve the poor free of charge. An influential businessman, Adiseshan, sees Sivaji as his competitor because he runs profit-making educational institutions and hospitals. In the process of establishing Sivaji Foundation, Sivaji is forced to pay bribes to several government officials and ministers to get basic approvals and sanctions done, and eventually he is forced to mortgage his property and sell his belongings when the bribes demanded become very high. Sivaji drags Adiseshan to court when he starts sabotaging the Sivaji Foundation through his political influence, but at the court, he is forced to admit that he paid numerous bribes. The judge declares the verdict in favour of Adiseshan and shuts down Sivaji Foundation.