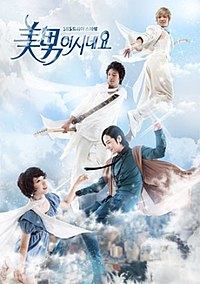 You're Beautiful is a 2009 South Korean television series, starring Jang Keun-suk, Park Shin-hye, Jung Yong-hwa of CN Blue and Lee Hong-gi of F.T. Island. The series follows fictional musician band, A.N.JELL and how the relationship between its members changes when a girl posing as her twin brother joins the band. It aired on SBS from October 7 to November 26, for 16 episodes.