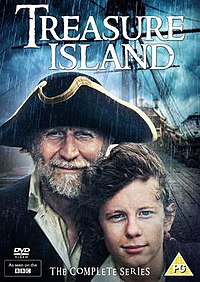 Treasure Island is a 1977 television adaptation of Robert Louis Stevenson’s famous 1883 novel. It was filmed in 1977 on location in Plymouth and Dartmouth (Devon), and in Corsica, and also at BBC Television Centre at Wood Lane, London.

Jim Hawkins (Ashley Knight) discovers a treasure map and embarks on a journey to find the treasure, but pirates led by Long John Silver (Alfred Burke) have plans to take the treasure for themselves by way of mutiny. This four-episode adaptation by John Lucarotti, while particularly faithful to the original, adds an expanded narrative concerning the declining Daniel Hawkins, as well as clarifying Squire Trelawney's naiveté in trusting Blandly and Silver.