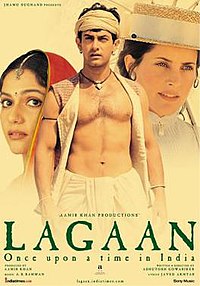 Lagaan, released internationally as Lagaan: Once Upon a Time in India, is a 2001 Indian Hindi-language epic sports film written & directed by Ashutosh Gowariker, produced by Aamir Khan. Aamir Khan stars along with debutant Gracy Singh, with British actors Rachel Shelley and Paul Blackthorne playing supporting roles. Made on a then-unprecedented budget of , the movie was the maiden project from Aamir Khan Productions and was shot in villages near Bhuj.

In a small town, Champaner, during the height of the British Raj in 1893, Captain Andrew Russell (Paul Blackthorne), the commanding officer of the Champaner cantonment, has imposed high taxes ("Lagaan") on people from the local villages. They are unable to pay due to losses caused by a prolonged drought. Led by Bhuvan (Aamir Khan), the villagers pay a visit to Raja Puran Singh (Kulbhushan Kharbanda) to seek his help. Near the palace, they witness a cricket match. Bhuvan mocks the game and gets into an argument with one of the British officers who insults them. Taking an instant dislike to Bhuvan, Russell offers to cancel the taxes of the whole province for three years if the villagers can defeat his men in a game of cricket. If the villagers lose, however, they will have to pay three times their current taxes. Bhuvan accepts this wager on behalf of the villagers in the province, despite their dissent.