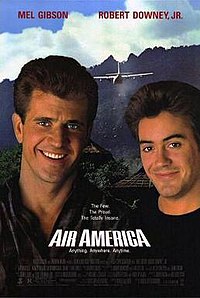 Air America is a 1990 American action comedy film directed by Roger Spottiswoode and starring Mel Gibson and Robert Downey Jr. as Air America pilots flying missions in Laos during the Vietnam War. When the protagonists discover their aircraft is being used by government agents to smuggle heroin, they must avoid being framed as the drug-smugglers.

In late 1969, Billy Covington (Robert Downey Jr.) works as a helicopter traffic pilot for a Los Angeles radio station. When he breaks several safety regulations by flying low, the U.S. Federal Aviation Administration suspends his pilot's license. However, his piloting skills, bravery and disregard for the law are noticed by a mysterious government agent, who tells Billy that he can get his license back if he accepts a job in Laos, working for a "strictly civilian" company called Air America. It is readily apparent that Air America is a front for CIA operations in Laos.