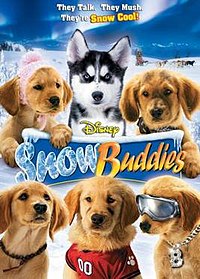 Snow Buddies is a 2008 direct to video film and the second installment in the Air Buddies series. It was released on DVD on February 5, 2008. The film takes place in the fictional town of Ferntiuktuk, Alaska.

Air Bud's five Golden Retriever puppies known as the Buddies from the town of Fernfield, Washington are having fun with their new owners before they go to school. The puppies meet up in the park and decide to play hide and seek. Budderball sees an ice cream truck and decides to go in, forcing the others to try and rescue him. However, the Buddies become trapped in a truck heading to Ferntiuktuk, Alaska. Upon arrival, the Buddies meet Shasta, a Siberian Husky puppy whose 11-year-old owner, Adam Bilson, is determined to win the Alaskan sled dog race because of what happened to his father. The puppies decide to help Shasta pursue his dreams as well as get to the airport, located at the finish line. Unfortunately, as Shasta's parents are both dead, this puts the puppies in a predicament as there is nobody to teach them how to become snow dogs. Fortunately, Shasta manages to persuade a legendary Alaskan Malamute named Talon, who had taught Shasta's father, into teaching the puppies into becoming his new protégés.