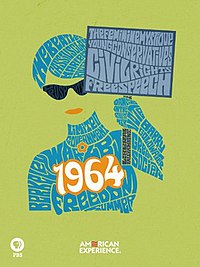 1964 is a documentary film produced by Insignia Films for the American Experience series about political, social and cultural events in the United States for the calendar year 1964. It is based partly on Jon Margolis book The Last Innocent Year: America in 1964. The documentary depicts the year 1964 as significant and epic in that following the assassination of President John F. Kennedy in late 1963, 1964, as a presidential election year, becomes a departure point for American history, with lasting effects today. It is also the year of the British Invasion led by the Beatles, when Cassius Clay fights Sonny Liston for the World Heavyweight Championship, the year after Betty Friedan's book, The Feminine Mystique, is published, and the year Republican activist, Phyllis Schlafly's book, A Choice, Not an Echo, is published. It is also the year of Freedom Summer, an initiative by the Student Nonviolent Coordinating Committee to register African-Americans in Mississippi, the subsequent murders of Chaney, Goodman, and Schwerner, three CORE activists, in Mississippi by white supremacists that created a national sensation, and the Harlem riot of 1964, culminating in the Berkeley Free Speech Movement at the University of California at Berkeley. A recurrent theme of the film is its departure as a presidential election year, with President Lyndon B. Johnson running as the expected Democratic Party nominee and the nomination of U.S. Senator Barry Goldwater selected through a grassroots campaign for the Republican nomination for President of the United States, that defines the future divisions of the US political party competition.