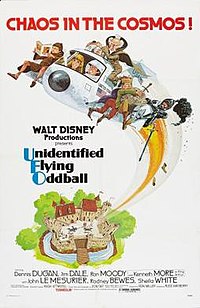 Unidentified Flying Oddball (UK title: The Spaceman and King Arthur) is a 1979 film adaptation of Mark Twain's 1889 novel A Connecticut Yankee in King Arthur's Court, directed by Russ Mayberry and produced by Walt Disney Productions. Subsequently re-released in the United States under the title A Spaceman in King Arthur’s Court, the film stars Dennis Dugan as NASA employee Tom Trimble who unintentionally travels back in time with his look-alike android Hermes.

After Trimble’s NASA spacecraft travels faster than the speed of light, it takes him and his android back to King Arthur’s Camelot. They then use their 20th-century technology to help defeat a plot by the evil Sir Mordred and Merlin to oust King Arthur from his throne.