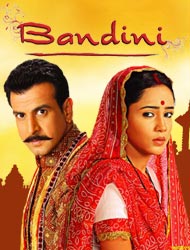 Bandini (English: Captured Female) is an Indian soap opera produced by Ekta Kapoor of Balaji Telefilms. It starred Ronit Roy and Aasiya Kazi and was set against the backdrop of Gujarat in Dharampur a village near Surat in Gujarat. The show premiered on 19 January 2009 and ended on 29 January 2011 on NDTV Imagine.

Santu Waghela is a poor but spirited girl who lives in the village of Dharampur with her maternal grandfather, Madhav Solanki, an experienced diamond cutter working for the middle-aged diamond merchant Dharamraj Mahiyavanshi. As an incentive to his best worker, Dharamraj offers to arrange and sponsor Madhav's granddaughter's marriage. Hours before the wedding, the bridegroom backs out and Madhav's fellow workers get agitated. Dharamraj, a widower, comes forward to marry the bride, Santu. For Dharamraj, the decision to marry Santu is purely a business calculation for appeasing his workforce. Dharamraj is still in love with his dead wife Subhadra, who has left him with 5 children: Hiten, Kadambari a.k.a. Kaddu, Maulik, Birwa and Suraj. Once home, he ignores Santu and she is constantly abused by his older sister, Tarulata a.k.a. Taru. After a long time, however, Dharamraj and most of his family members accept Santu as a member of the Mahiyavanshi family. Dharamraj finds his long-lost son Arjan. But eventually, because of some misunderstandings and complications, Arjan assaults Dharamraj. Birwa, trying to save her father, accidentally kills Arjan. To save Birwa, Santu takes the blame for the murder and goes to jail.