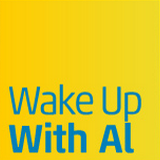 Wake Up with Al is an American morning television program on The Weather Channel. Airing Monday through Fridays live from 5 to 7a.m. Eastern Time, the program featured a mix of weather forecasts, news headlines and feature segments. It debuted on July 20, 2009 and was cancelled effective October 2, 2015.