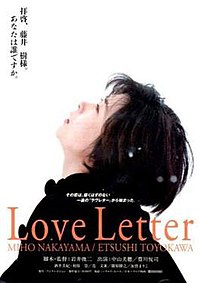 Love Letter is a 1995 Japanese film directed by Shunji Iwai and starring Miho Nakayama. The film was shot almost entirely on the island of Hokkaidō, mainly in the city of Otaru.

Hiroko Watanabe lives in Kobe and has lost her fiancé Itsuki Fujii in a mountain climbing accident. On the day of his memorial ceremony, two years after his death, Hiroko looks through his high-school yearbook at his parents' house. Mrs. Fujii explains that they used to live in Otaru, and that their old house is now replaced by a highway. Nevertheless, Hiroko records the address she sees under the name "Itsuki Fujii" in the yearbook, and decides to write him a letter. Surprisingly, she receives a reply from Fujii. Unsure who sent the reply, she keeps writing and finds out it was not from her dead fiancé, but from a woman also named Itsuki Fujii who went to high school with her fiancé and bears a striking resemblance to Hiroko. The movie cuts back and forth between Hiroko and Female Itsuki based on the letters they send to each other.