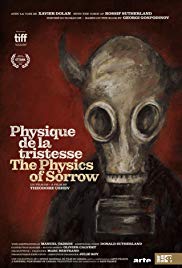 The Physics of Sorrow is a Canadian animated short film, directed by Theodore Ushev and released in 2019. Based on the novel by Bulgarian writer Georgi Gospodinov, the film tells the story of a man reminiscing about his childhood as he struggles to understand the meaning and purpose of his life.