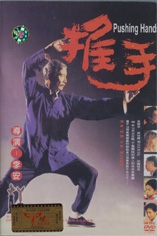 Pushing Hands is a film directed by Ang Lee. Released in 1991, it was his first feature film. Together with Ang Lee's two following films, The Wedding Banquet (1993) and Eat Drink Man Woman (1994), it forms his "Father Knows Best" trilogy, each of which deals with conflicts between an older and more traditional generation and their children as they confront a world of change.

The story is about an elderly Chinese Taiji Quan teacher and grandfather who emigrates from Beijing to live with his son, American daughter-in-law, and grandson in a New York City suburb. The grandfather is increasingly distanced from the family as a "fish out of water" in Western culture. The film shows the contrast between traditional Chinese ideas of Confucian relationships within a family and the much more informal Western emphasis on the individual. The friction in the family caused by these differing expectations eventually leads to the grandfather moving out of the family home (something very alien to traditional expectations), and in the process he learns lessons (some comical, some poignant) about how he must adapt to his new surroundings before he comes to terms with his new life.