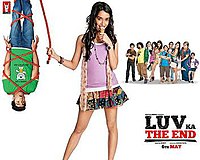 Luv Ka The End is a 2011 Hindi comedy drama film directed by Bumpy, starring Shraddha Kapoor and Taaha Shah in the lead roles. The film was the first production of Y-Films, a subsidiary of Yash Raj Films and released to mostly positive reviews on 6 May 2011. The film is also loosely based on the 2009 American film Wild Cherry and film John Tucker Must Die directed by Betty Thomas.

Rhea Dialdas (Shraddha Kapoor) has just done her JC (Junior College) and she already fancies herself marrying her charming, rich boyfriend Luv Nanda (Taaha Shah). who in turn, fancies winning this contest called BBC (Billionaire Boys Club), which is a rage amongst billionaire boys. It is seen that the boys upload videos of themselves with girls, while making out and stuff, on the website, and the more you do so more you get the points. Luv Nanda was going to become the highest scorer that year. This was shown to Rhea by the brother of a friend of Rhea.