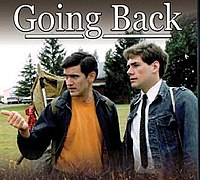 Going Back is a 1983 American independent drama film written and directed by Ron Teachworth and starring Bruce Campbell and Christopher Howe. It was Campbell's second feature film, produced shortly after The Evil Dead.

In 1964, two high school friends, Brice (Bruce Campbell) and Cleveland (Christopher Howe), leave their suburban neighborhood near Detroit, Michigan to hitch-hike their way to the countryside before going off to college. They are befriended by a lonely farmer, Jack Bodell (Perry Mallette), who offers them a place to stay. As days pass, Cleveland helps Jack around the farm and finds in him the father figure he lacks, while Brice falls in love with a local girl named Cindy (Susan Waderlow-Yamasaki). Four years later, Brice and Cleveland meet up in their senior year of college and decide to "go back" to Jack's farm, where they find much has changed in just a few years.