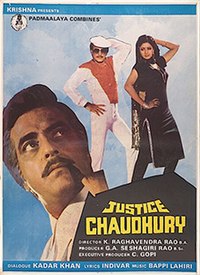 Justice Chaudhury is a 1983 Hindi film, produced by G.A. Seshagiri Rao under the Padmalaya Studios banner, presented by Krishna and directed by K. Raghavendra Rao. The film stars Jeetendra, Sridevi, Hema Malini, Moushumi Chatterjee in the lead roles and music of the film was composed by Bappi Lahiri. The film is a remake of Telugu blockbuster movie Justice Chowdary (1982), which also stars Sridevi in the same role. The film too recorded as a blockbuster at the box office.

Advocate R. K. Chowdary (Jeetendra) a disciple of justice, once prosecutes a murder case done by Shankar Singh (Shakti Kapoor), the twin brother of a dangerous gangster Jai Singh (again Shakti Kapoor) and the case is defended by Chowdhary's opponent Kailashnath (Kader Khan). Here Chowdhary wins the case and sentences Shankar Singh to death, there onwards, Jai Singh swore to avenge on Chowdhary when Kailashnath also joins him and they hang to repay. Chowdhary leads a happy family life with his ideal wife Janki (Moushumi Chatterjee), son Inspector Ramesh (Sridhar), daughter-in-law Lata, and daughter Lakshmi (Debashree Roy) a dumb girl. Parallelly, Ramu (again Jeetendra) a young & energetic guy, resembles Chowdhary is a motor mechanic & a racer and he loves Kailashnath's daughter Rekha (Sridevi). Recognizing Ramu's caliber Jai Singh & Kailashnath misuses him for their criminal activities which he too accepts to fulfill his life ambition of constructing a house for his mother Radha (Hema Malini) who is under prison for the crime he committed. Meanwhile, Chowdary becomes High Court Chief Justice which evildoers couldn't abide, so, they frame a plan, performs the Lakshmi's marriage with their acolyte Gopal (Raj Kiran) to exploit Chowdhary but he stands strong even Gopal necks out Lakshmi. At the same time, Kailashnath discovers Ramu as Justice Chowdhary's son, so, they again intrigue by creating Chowdhary as a deceiver of his mother and provokes Ramu against Chowdhary to take revenge. Now Ramu indicts Ramesh in a crime by changing his attire as Chowdhary and in the court, Chowdhary compelled to sentence life imprisonment to him. Thereafter, Chowdary starts digging the matter when he finds out Radha is alive & Ramu is his son. Then he recalls the past, Chowdhary & Radha are love birds in the college and just before their marriage, Radha misplaces. Later he ascertains herself as dead. Hence on the advice of his Diwanji, he reconciles with life and married Janki. At present, Chowdhary decides to affirm the truth but due to Janki's health condition, he holds back. In the meantime, Radha releases, Chowdhary meets her, learns that she has intentionally discarded from his life being aware of Janki's love when Chowdhary understands her virtue and also divulges Ramu's credulity. At that point of in time, evil-minded Jai Singh seizes Chowdary's family even Kailashnath also double-crossed by him. Here Chowdhary gamely breaks out his play, simultaneously, knowing the reality Ramu realizes his mistake and moves for his father's aid. At last, both of them see the end of Papa Rao when Radha sacrifices her life to save Chowdary. Finally, the movie ends a happy note with the marriage of Ramu & Rekha.