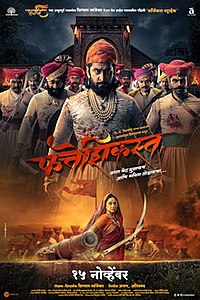 Fatteshikast is an Indian Marathi language historical drama film directed by Digpal Lanjekar and produced under the banner of Almonds Creations in association with A A Films. The film stars Chinmay Mandlekar, Mrinal Kulkarni, Sameer Dharmadhikari, along with Ankit Mohan and Mrunmayee Deshpande in supporting roles. The music of the film is composed by Devdutta Manisha Baji and the soundtrack includes devotional song of Sant Tukaram.