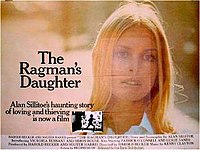 The Ragman's Daughter is a 1972 British crime–drama romantic film directed by Harold Becker and adapted by Alan Sillitoe from his short story of the same name. It was Becker's first film during the 1970s and stars Simon Rouse and, in her screen debut, Victoria Tennant. The film tells the story of the ill-fated love between Tony, a petty thief from a working-class family, and Doris, the daughter of an upwardly mobile scrap dealer.

Middle-aged Tony Bradmore privately thinks back on his wild youth and his love affair with Doris Randall. Tony's memories are interspersed with scenes from his current life as a cheese factory worker.